The Foundation’s Dedication to Safety in Southern Dallas

The Foundation’s Dedication to Safety in Southern Dallas

“And seek the well-being of the city to which I exiled you, and pray for it to the Lord, for in its well-being will be your well-being.”

Over the past 10 years community members have undertaken efforts to improve animal welfare in Dallas. In doing so, it has become clear that animal welfare directly correlates to community safety and well-being. Partnerships between area nonprofits and philanthropists have addressed issues of overflowing shelters and loose dogs in Dallas through two separate initiatives.

Dallas was the top city in Texas for number of animals euthanized in 2009 with 79 percent of animals taken to area shelters (approximately 26,500 animals) euthanized. The national average was 45 percent at the time. 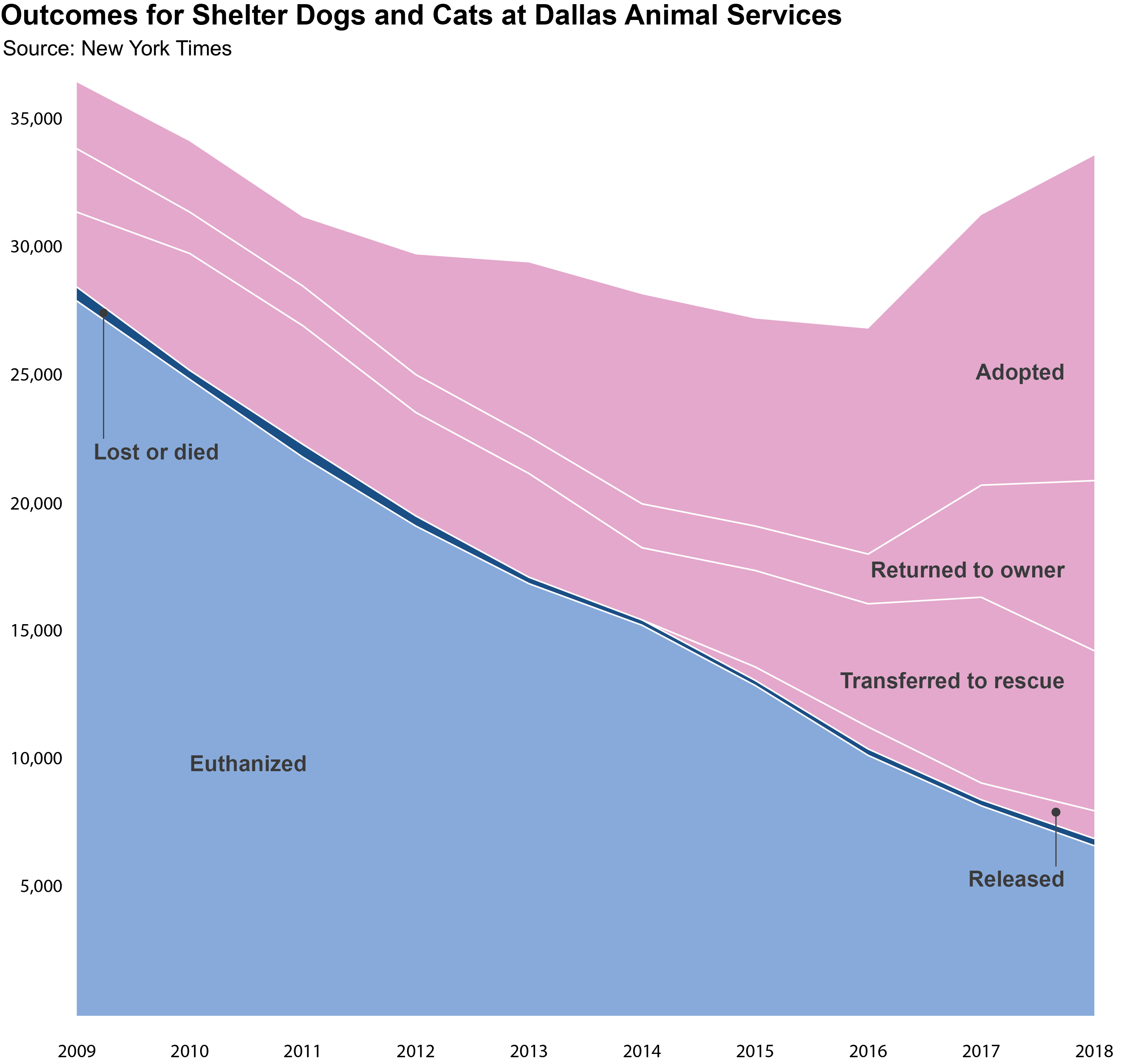 Astonished by this mortality rate, the SPCA of Texas, Spay Neuter Network, Dallas Animal Services, and a coalition of other animal welfare agencies decided to act. These agencies approached DFW philanthropists in 2010 with the idea to make Dallas a no-kill city.

The Rees-Jones Foundation, co-led by Jan Rees-Jones, an animal welfare advocate, joined the Companion Animal Funders Coalition, a group of concerned donors and foundations in North Texas. Together they launched a short-term, aggressive initiative called The Big Fix.

The goal of The Big Fix was to educate the community and provide free spay-neuter surgeries to residents of west, east and southern Dallas. The hope was that through the sterilization of pets, less animals would make their way to shelters, which would give better adoption outcomes for smaller shelter populations, thus decreasing the number of animals euthanized.

The Big Fix was largely successful, and when the initiative concluded in 2013 the live release rate1 was 42 percent – a 100 percent increase in just four years. Because of the sizable reduction in the unaltered dog population and its impact on puppy births, Dallas Animal Services and other agencies were able to continue spay-neuter surgeries and animal welfare services independently. As a result, the shelter populations became manageable, adoptions increased, and the live animal release rate in Dallas continued to increase each year.

But then the death of Antoinette Brown in 2016 drew the entire city’s attention to the loose dogs plaguing southern Dallas. Brown was mauled by a pack of loose dogs and later succumbed to her injuries.

At the direction of Dallas Animal Services, a large-scale study was conducted by Boston Consulting Group to get a baseline and produce specific recommendations for decreasing and maintaining the loose dog population in southern Dallas.

The study produced seven recommendations in total with six directed to DAS, including capturing loose dogs and increasing positive outcomes for dogs. The final recommendation was for DAS to collaborate with area nonprofits to conduct a large-scale spay-neuter initiative.

Based on the AVMA research, it was concluded that free spay and neuter surgeries would be an effective, low-cost solution to reduce both the loose dog population and prevent vicious dog attacks thus improving the welfare of residents. Given their prior collaboration on The Big Fix, the SPCA of Texas and Spay Neuter Network were tapped by DAS to co-champion the cause. And so, the Dallas Coalition of Spay Neuter Providers was born.

With the SPCA and SNN on board, many Big Fix funders, including The Rees-Jones Foundation, stepped forward to support the new spay-neuter initiative dubbed The Surge. The Surge adopted an aggressive approach with the intent of reducing the number of loose, unaltered dogs within five years.

At the start of Phase I in April of 2017, BCG reported approximately 100,000 unaltered dogs in a targeted area encompassing West and South Dallas spanning 23 zip codes. It was estimated that with no spay-neuter intervention, the population would have continued to explode resulting in close to 150,000 unaltered dogs within six years. However, during Phase I, The Surge spayed or neutered 54,182 dogs.

Additionally, The Surge was able to build three free clinics in southern Dallas for continued animal services and added a mobile spay-neuter clinic.

The live release rate continued to boom as a result of The Surge. 75.6 percent of animals left the shelter in 2017 – an increase of 257 percent in less than 10 years.

As a result, residents have reported feeling safer in their neighborhoods while going about their normal business – walking from their cars to their front doors, children walking home from the bus stop, and countless other mundane tasks that once felt risky.

One resident reported to SNN, “When [loose dog] sweeps began, the teams would easily pick up 30 or more dogs at once, but would have to leave some loose dogs they saw because they simply wouldn’t fit into a vehicle. Nearly every street you went down, you could find a loose dog. Now it’s a totally different situation. Typically, when I walk in a neighborhood that previously had very high loose dog rates, I rarely – if ever – see a loose animal. I have seen exactly one loose animal while walking in the past month. One!” 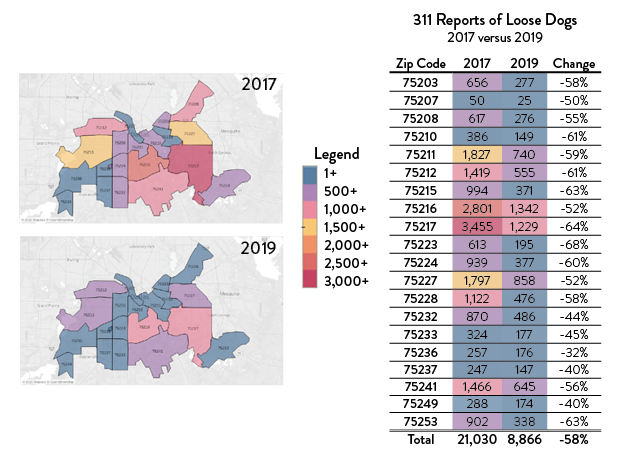 Due to The Surge’s effort, there has been a dramatic improvement for those who call home the neighborhoods of Pleasant Grove, Balch Springs, Oak Cliff, Casa View, Kessler Park, Redbird, and the Cedars.

The Rees-Jones Foundation’s support of both The Big Fix and The Surge comes from a long-standing interest in animal welfare and a desire for our communities to thrive. The origins of The Surge brought to light the fact that part of our community was suffering unbeknownst to most – roaming animals in southern Dallas were causing a significant disruption to our neighbors’ lives and contributing to misconceptions that left Dallasites less inclined to venture south for recreation. In response, the Dallas Coalition of Spay Neuter Providers, including the Foundation, provided more than $21.9 million to fund the largest spay-neuter effort attempted in the United States.

Since 2017 the Foundation has provided $14 million to The Surge effort as part of a $17.7 million commitment to animal welfare initiatives.

This article originally appeared in The Rees-Jones Foundation 2019 Summary of Grants.

Category: Original ContentSummary of Grants
other posts you may like
see all