The United Nations General Assembly adopted the Universal Declaration of Human Rights on December 10, 1948. The declaration proclaims the inalienable rights to which everyone is entitled as a human being – regardless of race, color, religion, sex, language, political or other opinion, national or social origin, property, birth or other status.

As Americans, this language is familiar. It echoes the sentiments ascribed in the Declaration of Independence, the Constitution, and the Bill of Rights as outlined by our country’s forefathers.

As Christians, this language, too, is familiar. It echoes the sentiments we seek to uphold each day as we grow in our faith, and as we practice compassion, empathy and patience.

“Learn to do right! Seek justice, encourage the oppressed. Defend the cause of the fatherless, plead the case of the widow.” – Isaiah 1:17

Causes that seek justice, give voice to the oppressed, and fight for basic human rights, speak to us as a Christian organization. We are proud to support nonprofit organizations both locally in Dallas and abroad in Southeast Asia and Africa that are working to secure universal human rights for all.

“No one shall be held in slavery or servitude; slavery and the slave trade shall be prohibited in all their forms.” – Article 4, Universal Declaration of Human Rights

Article 4 states that no one has the right to treat another human as his or her slave. But in reality, modern day slavery and bonded labor exists throughout the world today. It’s estimated that one billion people live in oppressive slums, surrounded by severe desperation and crime. Over 40 million people are trapped in slavery. 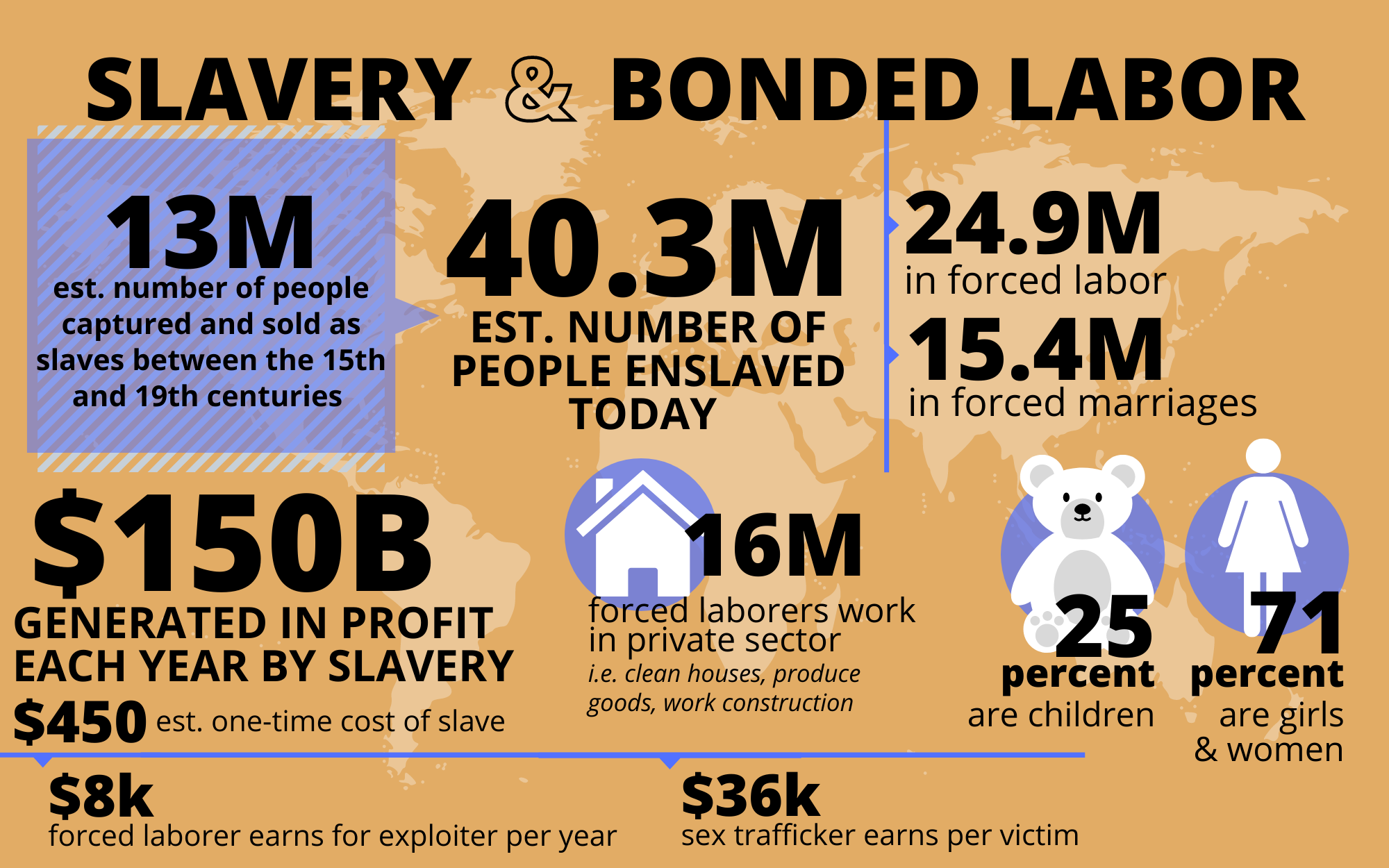 Graphic produced by The Rees-Jones Foundation. Data provided by The Guardian.

According to abolitionist groups, a person today is considered enslaved if they are forced to work against their will; are owned or controlled by an exploiter or “employer”; have limited freedom of movement; or are dehumanized, treated as a commodity or bought and sold as property.

There are approximately 8-15 million men, women, and children living in modern slavery in India alone, which is why the Foundation supports Justice Ventures International’s Sustained Freedom Project in India. JVI works in a number of countries around the world, but given the large population of enslaved peoples in India, the Foundation specifically supports its Sustained Freedom Project in India.

Through sharing the stories of those who have been rescued from slavery, JVI seeks to raise awareness of modern-day slavery and bonded labor practices.

Renu was 17 when she married and began her life of forced labor in India. Her husband was part of the Kamiya system—a form of caste-based, generational debt bondage. For four generations his family was enslaved and exploited for agricultural labor, with no hope of repaying the debt. Renu was now part of that cycle.

Renu and her husband labored long hours in blazing heat, with no electricity or toilets, in exchange for a few handfuls of rice per day. She persevered in order to feed her family.

Justice Ventures International and one of its local partners received information of the ongoing exploitation and began documenting cases like Renu’s. After months of investigation and petitioning, authorities intervened. The couple, along with 161 villagers, were released.

The freed laborers learned about their rights and received release certificates officially freeing them from slavery. Through JVI’s aftercare services, Renu found new strength. She used her compensation money to purchase livestock to help support her family.

Only two years after escaping, she was encouraged to run in the village election. In an unprecedented victory, she edged out the higher caste male candidate, who was supported by her former owner.

Today, Renu is transforming the village. As a government official, she issues contracts to build canals and drainage systems in her village. Renu ensures that freed bonded laborers have the opportunity to work on these projects. Renu looks to the future, where her children can “study, have proper jobs, and stand on their own feet.”

“After my rescue from bonded labor, I can live life as I please. I can go wherever I want, work where I want. I can eat, sleep, work, and take care of my family. Life is much better now,” Renu says. “I’ve become a channel of fair employment for others.”

“No one shall be subjected to torture or to cruel, inhuman or degrading treatment or punishment.” – Article 5, Universal Declaration of Human Rights

Article 5 states that nobody has the right to torture another human. However, the use of torture as a violent means of controlling, silencing, and intimidating individuals and societies remains prevalent today.

The Center for Survivors of Torture reports that over two-thirds of countries actively or tacitly endorse torture as a means of political control. It estimates that as many as 44 percent of refugees are either primary or secondary survivors of torture, which could account for as many as 1.3 million survivors of torture in the United States and 90,000 in Texas.

The Foundation supports the Dallas nonprofit Center for Survivors of Torture in its work to provide rehabilitative services to survivors of torture who have sought refuge in North Texas. It provides long-term mental health counseling, social services, legal and medical services, referrals, and training often focused on trauma and grief resolution.

CST provided services to 891 individuals in 2019 who came from 51 different countries and represented 64 ethnicities. Over half of the individuals reported that they were tortured for political reasons.

Kumar was a small-business owner in Nepal where he had his own delivery truck. He was targeted by Maoist insurgent militia who wanted him to provide financial and material support, and to join their political cause.

When Kumar refused to support the Maoists, they took his house and his vehicles, kidnapped him, and began systematic physical and psychological torture. Kumar’s condition was so grave that the local newspaper ran a story reporting that he had been killed. Miraculously, Kumar was able to escape to the United States where he requested asylum.

Kumar was referred to Center for Survivors of Torture for counseling, medical care and social services. After three months of weekly counseling and medical treatment, Kumar reported fewer nightmares and improved physically, feeling in control of his happiness for the first time in ten years.

Kumar was granted asylum in the US, and after two years of working seven nights a week at a local convenience store, Kumar was able to purchase plane tickets for his wife and daughter to join him in Texas. Kumar and his family currently attend free family therapy at CST, in addition to participating in CST’s English as a Second Language classes.

Through its specialized services, CST is addressing the mental health and related service needs of survivors like Kumar.

“Men and women of full age, without any limitation due to race, nationality or religion, have the right to marry and to found a family. They are entitled to equal rights as to marriage, during marriage and at its dissolution.” – Article 16, Universal Declaration of Human Rights

Article 16 states that men and women have the same rights when they are married and also when they are separated. However, in many countries and cultures, girls and women are taught to submit to their husbands and are treated as second-class citizens with virtually no rights of their own.

Religion is making an impact though. Because 91 percent of Burundians identify as Christian, the church has the access and opportunity to address the gap in sensitive and complex issues like family planning and spousal relationships. World Relief, a Christian organization, is uniquely poised to leverage their relationships with churches at the local level, which is why the Foundation supports its Families for Life Program.

Families for Life interventions focus on increasing trust in marriage and contributing to zero tolerance of violence against women in the home. World Relief states, “Harmful traditional beliefs about the role of girls and women, tribal and ethnic divisions, and cultural stigmas that marginalize the disabled, widowed, or abused, strip many from the fullness of life they deserve.”

Delphine Nduwimana didn’t have any money. No, it was all her husband’s. Every day he came home from work with his wages kept safely in his pocket. Delphine knew it was there, but in her marriage, she had no right to decide how the money was spent. 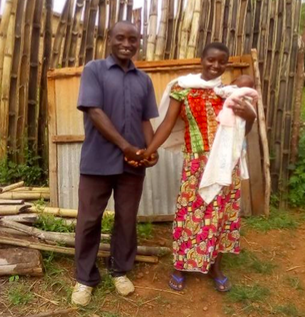 Delphine and her husband now serve as a mentor couple in their church (Photo Credit: World Relief).

Every day, her husband would walk right past her. Tired from work, he had no time to tell her about his day, and he certainly didn’t have time to ask her about hers.

Delphine felt completely stripped of her voice. Powerless in her family.

You can imagine her surprise when one day, Delphine’s voice was heard.

Through the Families for Life Program, Delphine’s husband learned about the importance of family dialogue and sharing resources. He learned that women, just like men, are created in the image of God and that marriage is meant to be a partnership.

Today, Delphine handles the money. She and her husband make decisions together as a family. The best part of the whole transformation, according to Delphine, is that when her husband comes home and, even if he’s tired, he sits and talks with her.

Families for Life has changed Delphine’s life and marriage. So much so that she and her husband now serve as a mentor couple for others in their church. That’s how change keeps growing and moving in families across Burundi.

When change this lasting and deep occurs, people can’t help but share what they’ve learned with others. Long lasting transformation is happening – one couple, one community and one country at a time.

Nonprofit organizations around the world are tackling the systemic practices that prevent certain populations from experiencing the universal human rights to which they are entitled. Scripture says, “all of you, live in harmony with one another; be sympathetic, love as brothers, be compassionate and humble” (1 Peter 3:8). Led by our faith, and our belief that all are deserving of these human rights, the Foundation will continue to seek out opportunities to improve the lives of those lacking in such freedom.