“I want you to understand that your first duty is to humanity. I want others to look at us and see that we care not just about ourselves but about others.” – Madam C.J. Walker

Black History Month is an opportunity to “honor the accomplishments of Black Americans in every area of endeavor throughout history”. Madam C.J. Walker is most often recognized as the first self-made, female millionaire in the United States, but Walker’s legacy is arguably her lifelong dedication to philanthropy. Through the success of her beauty business, Walker was able to leverage her philanthropic efforts and empower her employees to impact change in their own communities.

Sarah Breedlove was born in Louisiana in 1867 – the first of her family to be born into freedom after Emancipation. Breedlove was married, had a daughter, and widowed by the age of 20. Breedlove moved to St. Louis in 1888 where she worked as a laundress. Breedlove reconnected with her family in St. Louis, “but as a widow with a child, more support was necessary. Sarah was welcomed into the city by the social infrastructure undergirded by St. Paul AME Church and its many female members as well as local black clubwomen and social-service and benevolent organizations. St. Paul AME Church was the entry point and primary connector of Sarah to this social network… the church had an active base of churchwomen, who ran internal ministries and auxiliaries, and clubwomen, members who participated in community clubs outside the church, within its membership” (Freeman, 36).

Through these connections, Breedlove was able to receive childcare for her daughter while she worked, eventually allowing Breedlove to send her daughter to a boarding school in Tennessee, and enroll herself in night school. Being a member of the church, and later the black fraternal organization of the Curt of Calanthe, Breedlove was introduced to giving circles. Harnessing her community, Breedlove became the donor of charitable acts as opposed to solely the receiver.

This served as the catalyst to Breedlove’s lifelong philanthropic work. “Young Sarah learned that the ability to give and be helpful to others was contingent on the willingness to do so rather than financial wealth; thus, she birthed the early expressions of Walker’s gospel of giving” (Freeman, 39).

Through divine intervention, Breedlove began developing her own hair care products to treat her hair loss. Breedlove recounted, “For one night I had a dream, and in that dream a big black man appeared to me and told me what to mix for my hair. Some of the remedy was from Africa, but I sent for it, mixed it, put it on my scalp, and in a few weeks my hair was coming in faster than it had ever fallen out. I tried it on my friends; it helped them. I made up my mind I would begin to sell it” (Freeman, 50-51). In 1904 Breedlove began her career as a hair-care entrepreneur.

After relocating to Denver and marrying Charles Joseph Walker in 1906, Breedlove began using the moniker Mrs. C.J. Walker (later adapted to Madam C.J. Walker) in her hair product advertisements. With the help of her husband’s marketing prowess, Walker’s business took off. Walker traveled throughout Colorado promoting her products and training women through classes on how to grow their hair. Walker’s daughter Lelia joined her and helped manage a new store they opened together in Denver.

“Madam C.J. Walker’s dreams included building an international company, employing thousands of black women, and engaging a type of philanthropic giving that called on a range of resources at her disposal to make gifts to uplift the race, empower black women, and make life better for others” (Freeman, 53).

After a few years in Denver, Walker left in search of larger markets in cities in the South and Northeast with developing black populations. In September 1911 Walker incorporated the Madam C.J. Walker Manufacturing Company and established the headquarters in Indianapolis. The Walker Manufacturing Company employed women, called “agents”, who worked as trained hairdressers, sold Walker’s beauty products, and recruited and trained other women.

“I am in the business world, not for myself alone, but to do all the good I can for the uplift of my race.” – Madam C.J. Walker

“She did so many activities and projects that fit under the notion of philanthropy in terms of voluntary action for the public good,” said Tyrone McKinley Freeman, author of Madam CJ Walker’s Gospel of Giving, Black Women’s Philanthropy during Jim Crow, in an article published by the Lilly Family School of Philanthropy. “She saw her company as a vehicle and opportunity for uplifting and empowering African-American women by providing jobs outside of menial labor. She incubated salons to help black women launch businesses. Education was important for her, so she created a network of beauty schools to offer a professional credential at a time when there were unjust legal limitations placed on black learning.”

Walker has been praised for her ability to combine three separate sectors – the market, the government and the nonprofit sphere – into one:

In the African American historical experience, the notion of three separate sections has not always worked well because oppression has been pervasive and the three sectors have colluded in that oppression. During Walker’s lifetime, African Americans were either locked out of the private market or locked into its most menial and worst-paying jobs; their rights were denied, acknowledged, and denied again by the government, which had previously legalized their enslavement; and their social-service needs were largely neglected by agencies… [African Americans] needed to be creative and adaptive, which required thinking across the boundaries of markets, governments, and social services and using any available means of meeting their own needs and working for societal change. The practices of self-help evolved to compensate for these failures, which meant that black institutions – whether schools, businesses, fraternal lodges, churches, or service agencies in name – would have to serve multiple purposes in practice. (Freeman, 56-57).

Therefore, Walker expected more of her agents than just sales.

Walker envisioned her agents performing charitable works in their communities as they sold products and advanced beauty culture. To accomplish this, Walker encouraged her agents to create clubs at the local level designed to “bring the agents together as a cohesive group for the benefit of their profession, their communities, and ultimately, their race” (Freeman, 108). 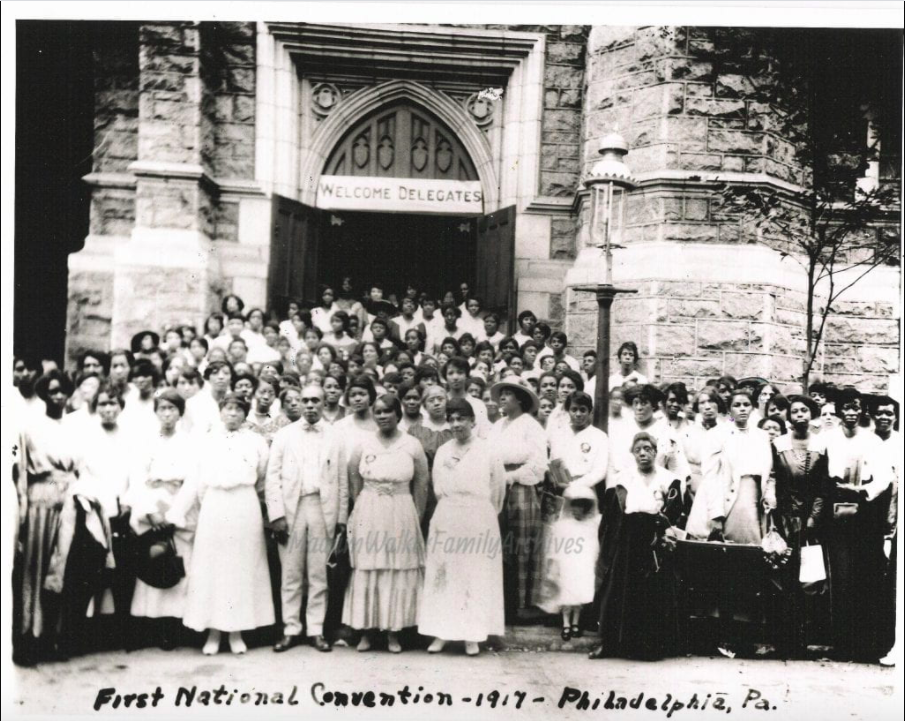 Walker communicated her desire for these clubs to give back to their community. The clubs conducted a range of charitable works – some held events to raise money for community organizations, purchased soap for poor families, put together Christmas baskets full of food, others provided educational programs on health and business development, and some cared for the sick and elderly, supported students, and paid housing costs for poor families.

To encourage such philanthropy, Walker recognized the most active clubs with monetary prizes. This recognition became a key feature of the National Beauty Culturists’ and Benevolent Association of Madam C.J. Walker Agents, Inc. conventions.

“In preparation for the second national convention in 1918, she set aside $1,000 for multiple awards to inspire more clubs to engage their communities ‘in order that more people might be benefited.’ Further, she intended to recognize the club that performed the ‘most charity work’ as well as clubs whose members gave one penny per day for charitable purposes. What is more, any agent could be charitable because of this broad definition for their charity was not constrained by money (Freeman, 124).”

The Influence of the Church and Black Fraternities

Lord help me live from day to day

In such a self-forgetful way

That when I kneel to pray

My prayer shall be for OTHERS.

Help me in all the work I do

To ever be sincere and true

And know that all I’d do for you

Must needs done for OTHERS.

-From The Secret to a Happy Life, said to be Madam C.J. Walker’s motto

Black fraternities at the time, especially the National Association of Colored Women (NACW) and the Colored Knights of Pythias, influenced the autonomous structure of Walker’s clubs.

Black fraternities “provided opportunities for black men and women to exercise civic leadership skills and competencies through officer positions, committee structures, maintenance of financial and organization records, event coordination and conduct of meetings. Black organizations were bastions of self-determination and autonomy… They gave black people a means of declaring and living out their humanity and cultivated avenues for striving and contributing something to the larger good” (Freeman, 114).

Walker’s brand of activism involved doing charity work and speaking out on important issues of the day. These behaviors were built into the clubs from the beginning.

“She organized her agents into clubs so they could sell products and serve others. The agents did charity work in their communities. They produced a resolution against lynching, so there was an activist element to it where they were collectively raising their voices as black women,” said Freeman. “This is what they did; the expectation was that you would give back to society. Madam Walker had a unique platform and more resources than the average person, but she was doing what black women typically did in their communities.” 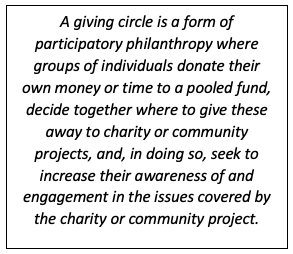 Through Walker’s agents and clubs, she orchestrated the model of giving circles at the corporate level. With roots in the church, giving circles have expanded in an effort to help raise awareness of the needs of the community and rally around the local organizations that are working in the space.

“In the past few decades, black giving circles have become a particular area of interest, especially among black women, reminiscent of the resource-pooling and sharing habits of washerwomen, clubwomen, fraternal women, and Walker agents. Walker used her company as a base for her gospel of giving, but today some high-net-worth African Americans are turning to philanthropic tools like family foundations, donor-advised funds, and community foundation funds to institutionalize their giving” (Freeman, 207).

The significance of giving circles today as a philanthropic model underscores the legacy of Madam C.J. Walker and those who walked along side her.