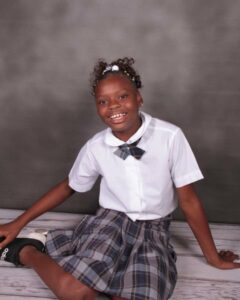 Multiplication-loving Ja’Niyah has been a Rivertree student for three years, and is now in 5th grade.

This school-year has been a formative one for Ja’Niyah. Her teacher shares that Ja’Niyah has grown tremendously since the beginning of the school-year, and is focused on working hard to get the grades Ja’Niyah feels she deserves.

Although she loves going to P.E., Ja’Niyah says her favorite part of the school day is math! At the beginning of the year, Ja’Niyah struggled with her attitude and asked if she could meet with Rivertree’s Behavior Management Team (BMT) in the mornings. The Behavior Management Program is one of the many trauma-informed interventions Rivertree offers to support students in understanding and overcoming struggles that could affect them academically.

The BMT came alongside Ja’Niyah as she challenged herself. They assured Ja’Niyah that as she loves herself, she can better love others.

Ja’Niyah’s hard work has transcended academics as her teachers report that Ja’Niyah shows great leadership skills amongst her fellow classmates. This led to Ja’Niyah receiving the Scholar of the Month Award in December!

Ja’Niyah is also proud of what she has accomplished. When asked what areas she has grown the most in while at Rivertree, Ja’Niyah replied, “Reading, and my attitude”.

Rivertree is so proud of Ja’Niyah and her desire to be a better person by loving well, working well, learning well and leading well!