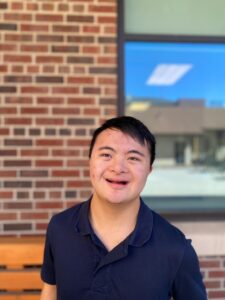 Ken attended the same charter school as his siblings. Ken had a positive experience at school – the students were kind, and the teachers tried to include him and revise the curriculum as much as possible.

However, the gap between Ken and his peers kept growing. Ken was spending more and more time in the resource special ed classroom, separate from his classmates. Ken received more individualized attention but lacked social interactions with his peers.

When it was time to move to middle school Ken’s parents made the difficult decision to transfer him to Notre Dame School.

“Honestly, it seemed like an odd decision, because all of his life I had been fighting for inclusion,” said Ayako Chan, Ken’s mother. “And now I was sending him to a school where ALL of the students had a disability. We wondered if we were making the best decision for our son.”

“Fast forward to today,” said Ayako, “I can say YES! We made the right decision for Ken!”

Every morning as Ken arrives to school, he is greeted with a “Buenos Dias, Ken” by the Principal Carmen Fernandez, who knows that Ken speaks a little Spanish.

During and after school Ken has friends from all different ages and backgrounds. Ken practices karate or basketball, participates at Young Life on Sunday and goes to summer camp – all with Notre Dame students.

“At Notre Dame Ken not only found a school, but he found community,” said Ayako. “My concerns about sending Ken to a school with students with disabilities became an advantage for him.”

Previously Ken was the only student with Down syndrome in the entire school, but now his disability is not an excuse to avoid doing something at school. Ayako explains that Ken is expected to do more at Notre Dame because his peers are also expected to do so.

“At Notre Dame School the students’ disabilities seem to fade. You do not see the disability but see each student – their unique personalities and how completely different they are from one another,” said Ayako. “Their abilities shine more – abilities that can turn into possibilities.”

“At Notre Dame School Ken is no longer ‘the kid with Down syndrome’. He is just Ken,” said Ayako.