Scott and Aurelia Green started their foster parent journey in 2014 when they welcomed their first foster child into their home.

Four years later the Green Family became a part of the Treatment Foster Care (TFC) Program at CK Family Services. There are numerous TFC teams each comprised of foster parents, a foster home case manager, a therapist, a wrap-around care coordinator, and a skills trainer. The TFC Program provides youth whom would typically be referred to an alternative placement, such as a Residential Treatment Center (RTC), with a nurturing, caring home instead. The purpose of the TFC Program is to promote growth and healing in preparation for youth to find their forever home. 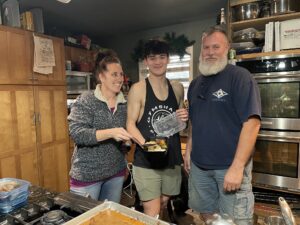 In July of 2020, the Green’s welcomed Brandon, a 16-year-old boy, into their home through the TFC Program. Brandon entered into the foster care system at age 15, having suffered from severe abuse and neglect for the majority of his life. Prior to entering the TFC Program, Brandon spent time in residential treatment centers and a juvenile detention center.

Brandon struggled with his self-esteem, motivation, and overall mental health when he first arrived at the Green’s home. Brandon would often get suspended from school and disconnect from everyone.

Brandon improved leaps and bounds after just a few months in their home, so Brandon and the Greens worked with Brandon’s psychiatrist to wean him off all his psychotropic medications. With the support and encouragement of his team, Brandon began losing weight, which increased his self-esteem. Brandon joined his school’s wrestling team where he has excelled, and has maintained friendships with his peers. Brandon has also been on his school’s honor role for two consecutive semesters and has begun applying to college.

Although Brandon turned 18 at the end of 2021, he chose to extend his stay in foster care, remaining in the Green’s home, in order to absorb the benefits of continued support from his team, giving him the best chance at a successful start to adulthood.

The Green’s continued dedication and commitment to foster children, and Brandon’s measured success over the last year and a half, exemplify the exact purpose of what the TFC Program was intended for, and what CK Family Service envisions for every foster child that enters the program.